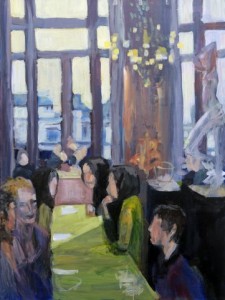 Rachel Francis is a Toronto artist who works in primarily in acrylic. She loves the human form and the rough and tumble of its existence and as a result her work is strongly figurative. Recently she has begun exploring narrative themes in her painting.

Rachel is deeply influenced by the writings of John Berger, by his view that appearances are a frontier and that “painters search for messages which cross the frontier: messages which come from the back of the visible” – that they are engaged in a “ferocious … dialogue” which “requires faith. It is like burrowing in the dark, a burrowing under the apparent. The great images occur when the two tunnels meet and join perfectly.”

Rachel’s work has been recently exhibited in Toronto at:

Rachel was also featured in the Arts on the Danforth 2012 festival. She is also a frequently featured artist on the online auction gallery ARTBomb and her work has appeared on HGTV.com.