These paintings were inspired by the following lines from The Lives Of The Heart by Jane Hirshfield:

“You must try, the voice said, to become colder. I understood at once. It’s like the bodies of gods: cast in bronze, braced in stone. Only something heartless could bear the full weight.” 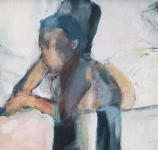 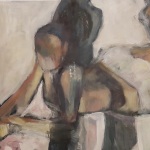 These paintings belong to a series called Ode to Andalusia. Odes move through their subject matter in a particular way – they begin in a place, go on an interior journey and return by way of ending to a somewhat transformed starting point. For me, the end of the journey was a recognition of the Spain that Lorca captured in the following words:

Somewhere in the South of France

These paintings are part of an experiment to work with metallics. The great challenge is taming them – it’s a very fine line to walk. Painting this series makes me think of an Emily Dickinson poem that goes something like this:

A Pit—but Heaven over it—

To dream—to sap the Prop
That holds my chances up.
Ah! Pit! With Heaven over it!